A residence stands on an extremely small triangular site, “heta-ti”. Moreover, the surrounding area is crowded. Dividing an irregular urban block into rectangular lots one by one from the parts adjacent to the road, finally a secluded lot that is hard to use is left over, which is what is called “anko”(it means Japanese sweets wrapped with rice cake), and that is exactly this site. Further, a maximum volume allowed by the code results in triangular one. A building had to be set in this triangular volume. However we work out, we are bound to the shape of the site, but our idea was to try to search possibility that can’t conceive without “heta-ti”.

First of all, according to the simple rule of “sumi-kiri”, three corners including two acute angles, which are hard to use as indoor space, are trimmed off the triangular maximum volume. Next, we tried to correspond to the function that is necessary for residential space by working out the cutting angle, such as inclining outward, inward or not parallel. For example, concerning “sumi-kiri” on the south side, the exterior walls incline outward according to the need of building eaves over the terrace as a drying area, and that on the west, they incline inward and also don’t make parallel in order to make side wall blocking the view from the street. In a similar way, concerning on the east side, we worked out the cutting angle on basis of inside demands. Further, concerning an observation platform that the clients requested for strongly, we were able to make this space by cutting off the top of the roof plane controlled by legal restrictions. The exterior wonderful form is created by a simple rule “sumi-kiri”, and because of optical illusion, the exterior wall appears to incline.

This site is surrounded by rectangular lots. In each adjacent site’s corner, unused spaces are left over although they are small. By adding the triangular exterior space to spaces with the site boundary in between, collected open spaces to some extent are created. That is, the void always exists outside openings. The rectangular neighboring houses don’t take trouble to make openings toward each site’s corner. Consequently, the clients can have the open space to themselves. Its “shakkei” looks like alchemy and it is the power that a triangular “heta-ti” has potentially and inevitably.

A reinforced concrete basement of existing residence was fit in old retained wall facing to the adjacent site on the north side that is one-story lower. Though we were judged that it is impossible to reuse it from a structural point of view, we were not able to pull it down within budget. Moreover, in a small site, we must make spaces for three generations family of six, so by pouring concrete into existing reinforced concrete basement as a substitute of mold, we decided to make a basement one size smaller than existing. We may say that this is the renovation in a broad sense. Consequently, within substantially three-story height, seven floor in all – including under floor storage (will be used as private room for husband in the future), a bunk bed and an observation platform – are layered. We feel like this residence has used up this site not only horizontally but also vertically.

There is luck in the leftovers. Or perhaps, it may be more than. Collecting strained lees of wine and distilling, fermenting it and spending time and effort, at last very delicious drink is made; this is because why we named this residence “grappa”. 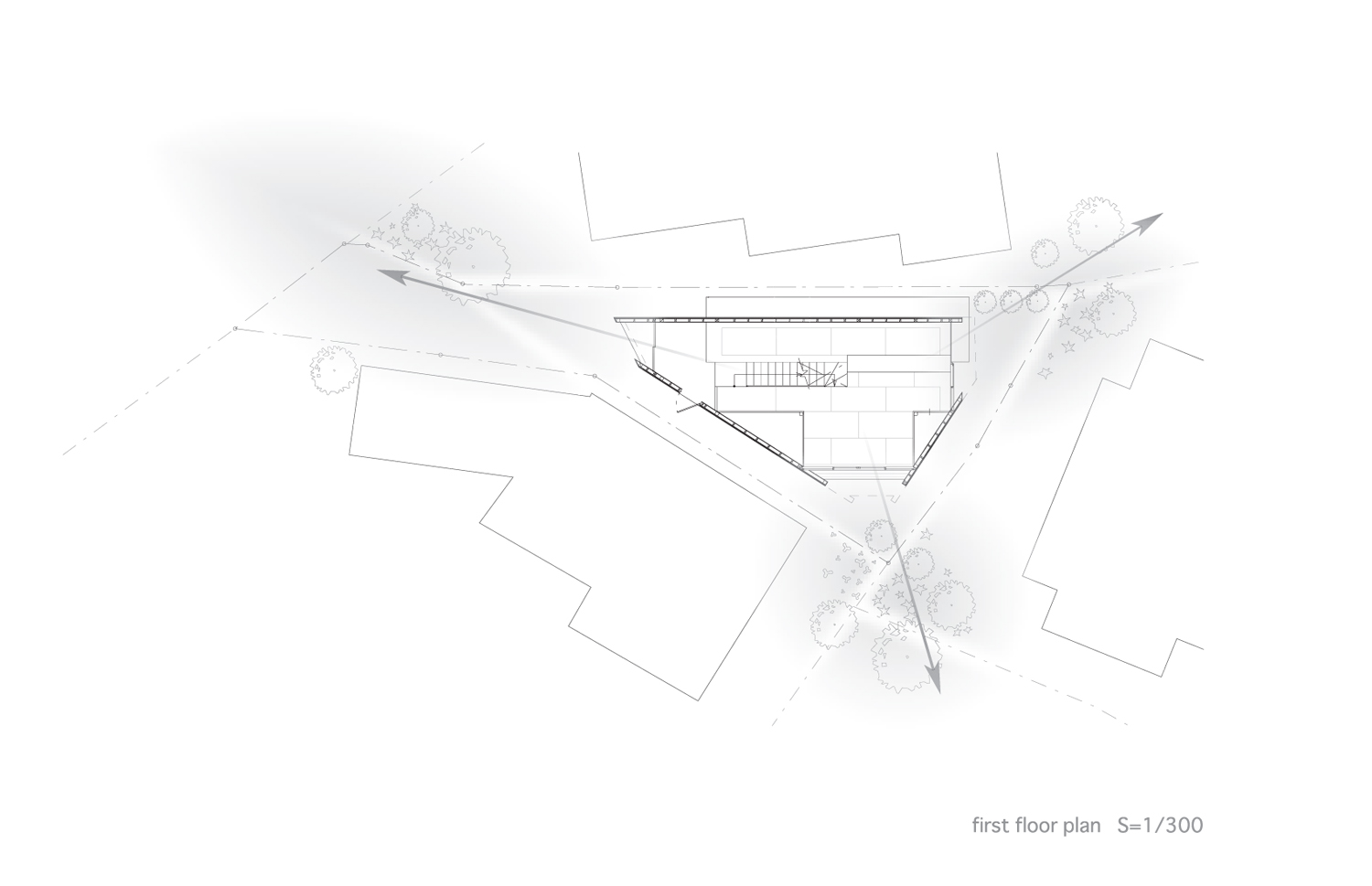 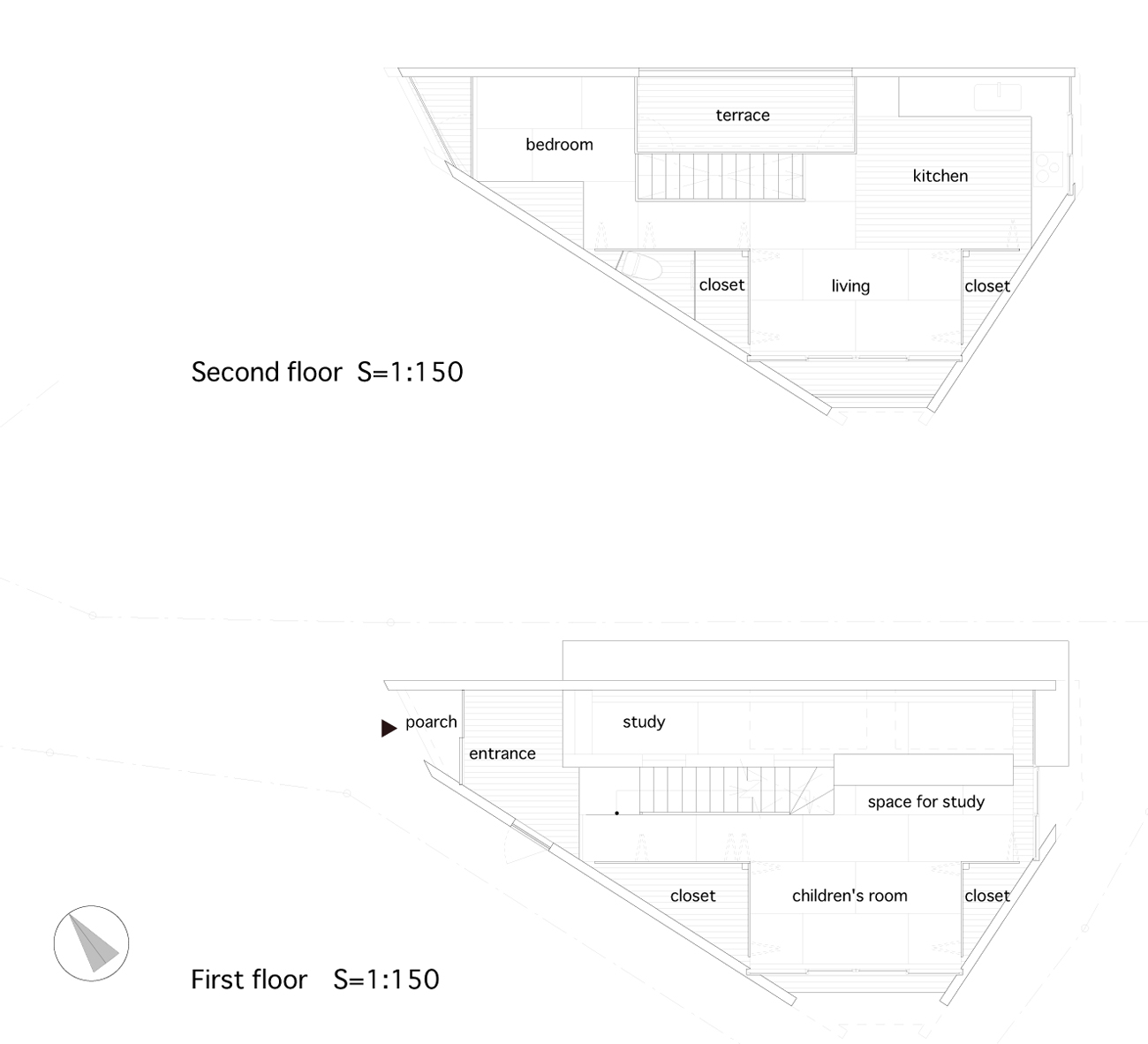 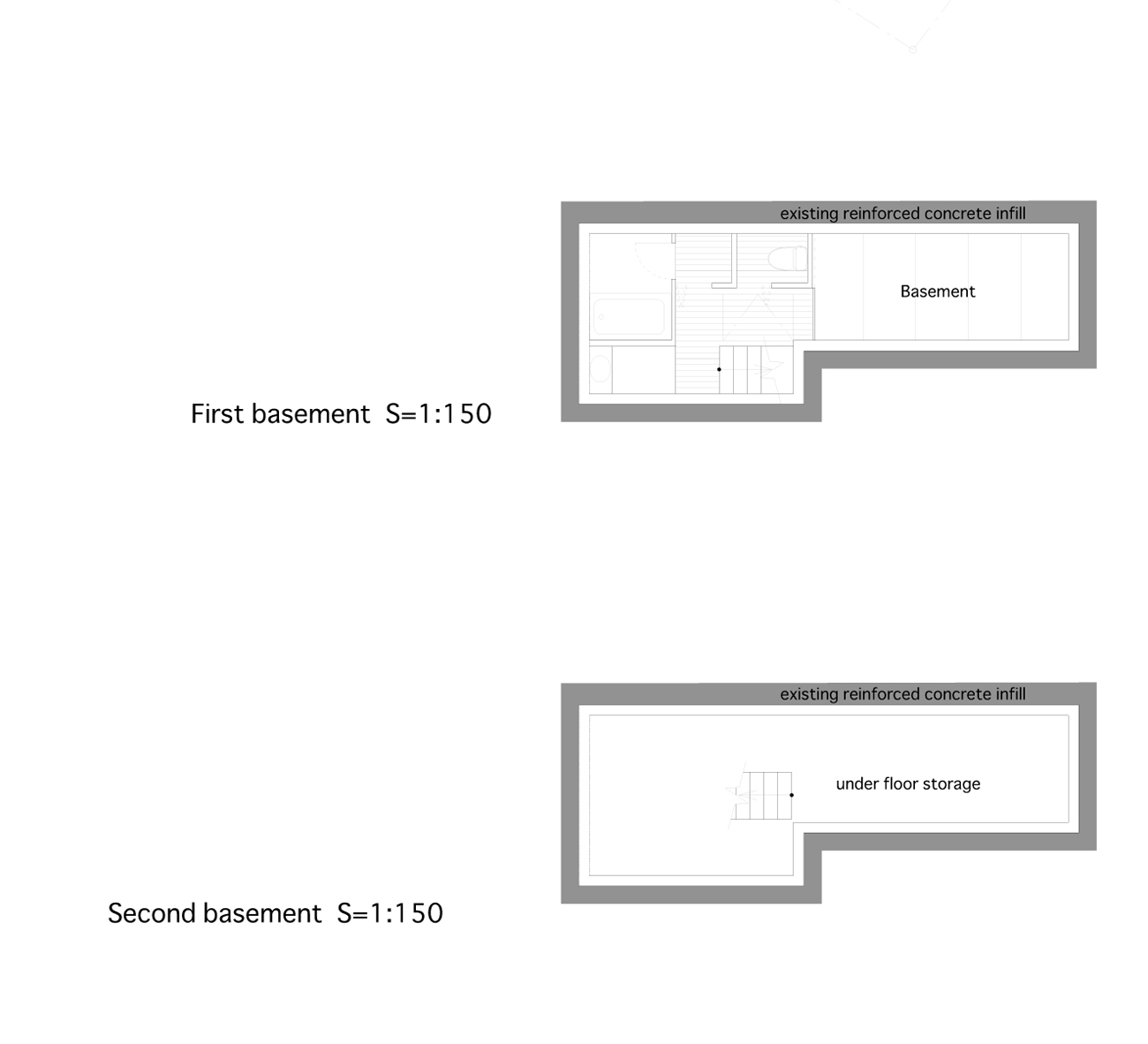 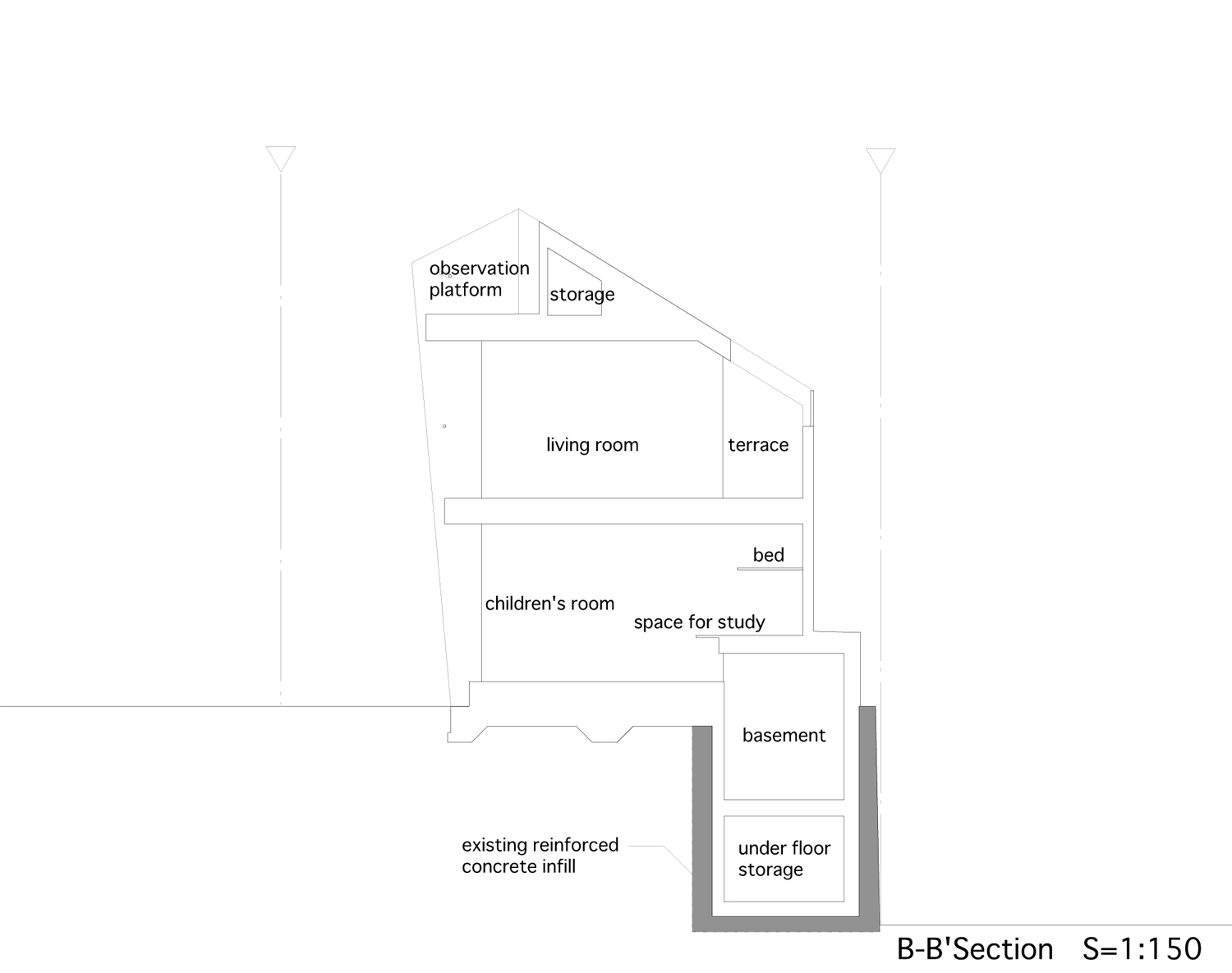 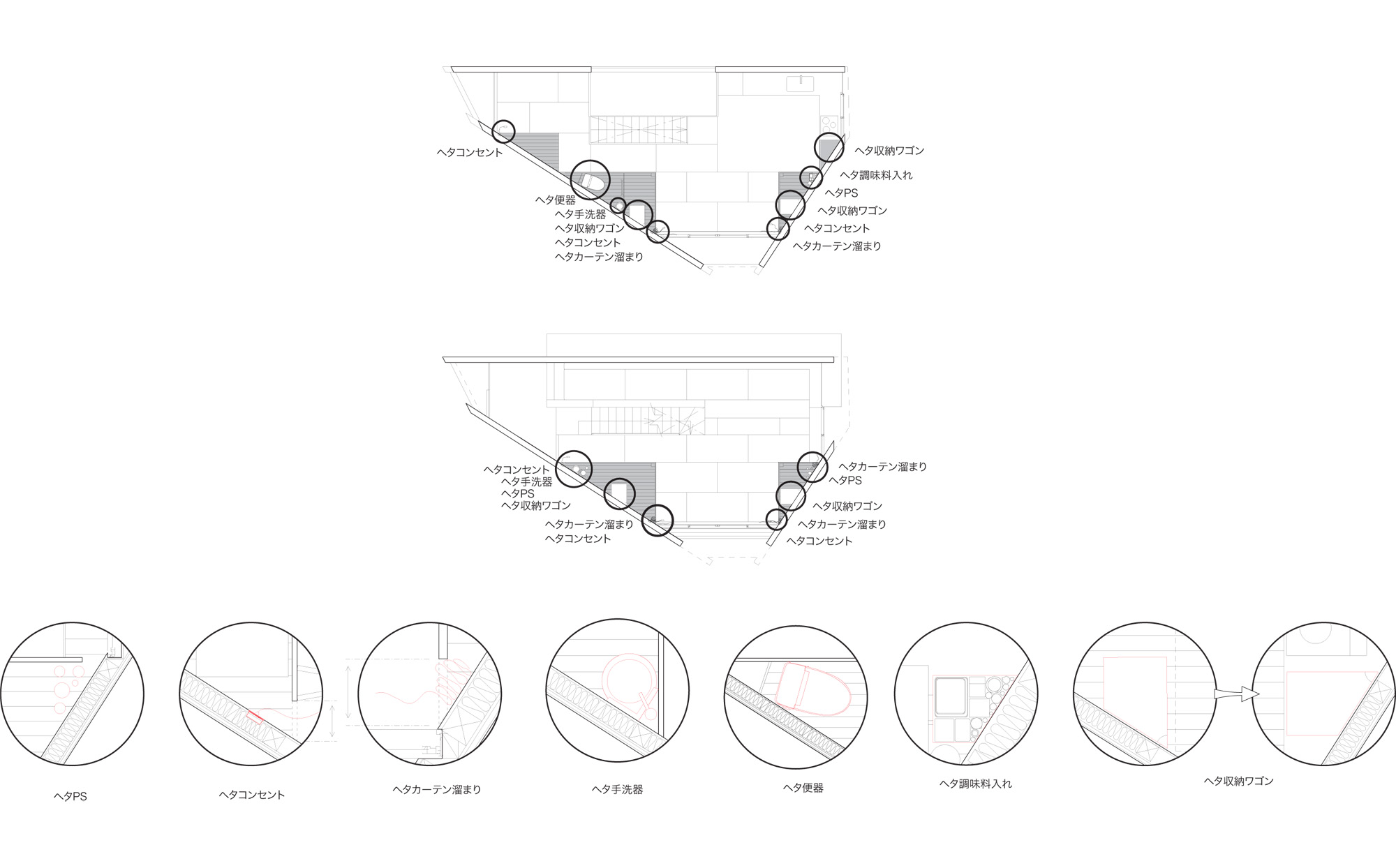