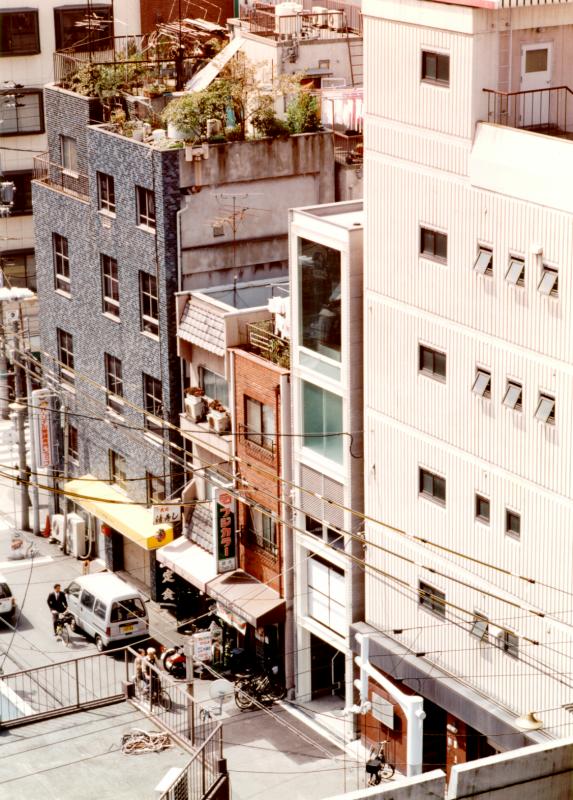 ‘House in Nipponbashi’ was built on an extremely small plot of land in downtown Osaka. The facade of the building, 2.5 m in width, fills the entire front of the site. The house is 13 m deep, and the lower three floors were kept as low as possible. This construction is topped by the topmost floor, where the dining room is located. With a 6 m high ceiling, the dining room occupies as much as two-thirds of the entire building; the remaining third of the depth is filled by an open-air terrace. As a result, the structure not only emphasizes the vertical direction but takes full advantage of the depth of the narrow site. 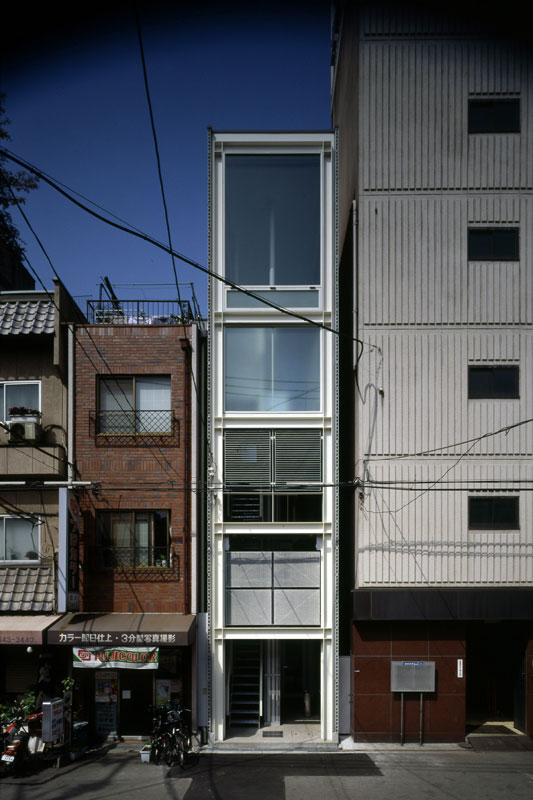 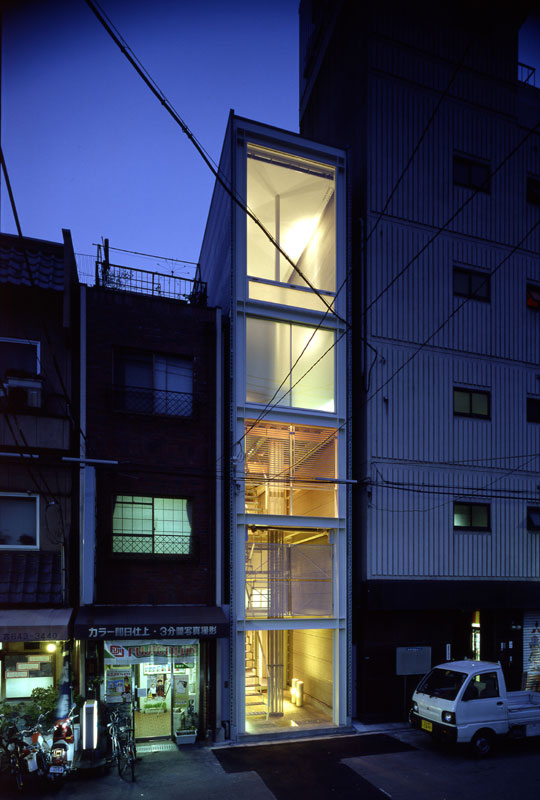 The building has two main themes. One is the verticality of urban life. The other is the creation of a floating living space (the top floor) that is cut off from the noise of the street and is close to Nature. Achieving this required nothing more than a few square m of terrace space and just 30 m² of building space, including the generous dining room. What I tried to do in designing this house was to give new meaning to the concept of a roof garden. 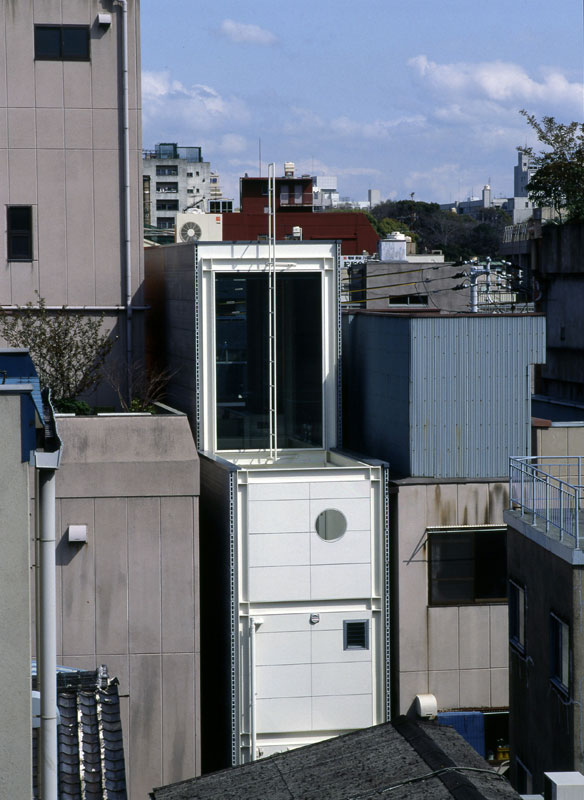 view from the back: dining room with 6m high ceiling + roof garden 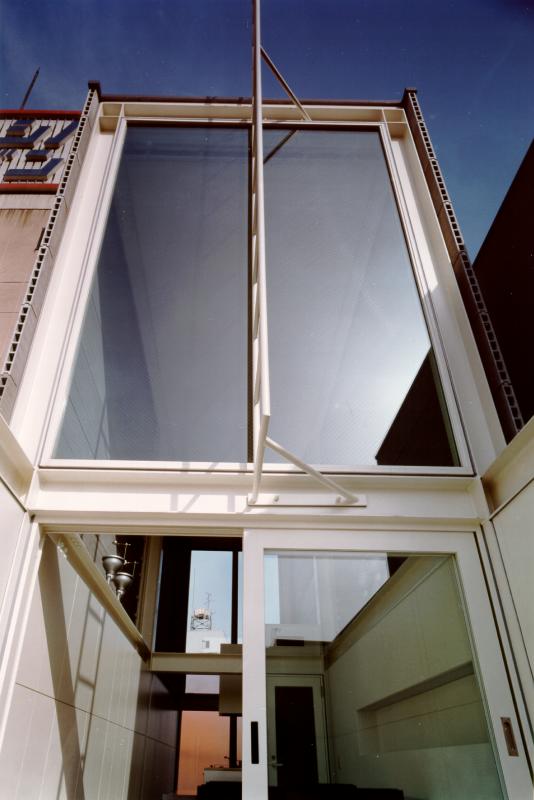 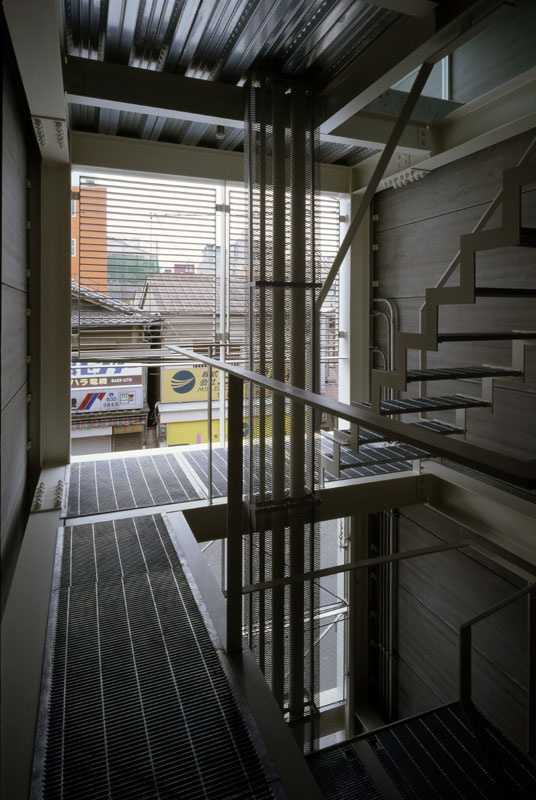 steel beams and pillars can be seen throughout the interior

Take, for instance, Le Corbusier’s Beistegui House in Paris facing the Champs Elysees. The house was planned to be topped by a penthouse. Among the salient features of this building is the view it affords, which puts the observer at the same height as the Arc de Triomphe. At the same time, however, the observer finds himself in an elevated outdoor space that appears to be at ground level. In other words, the building creates in the observer both the sensation of a privileged view and a unique feeling of being afloat. That, I think, is the precious quality that was made possible by the modern concept of space, or more specifically: the roof garden. 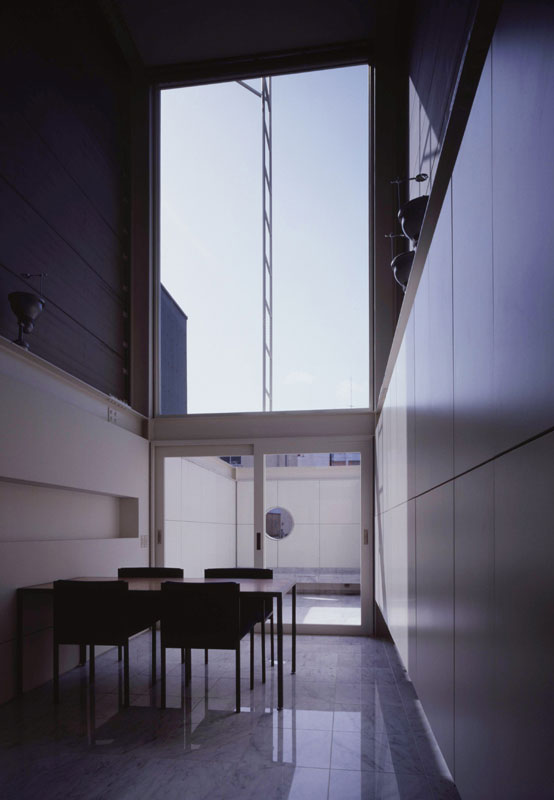 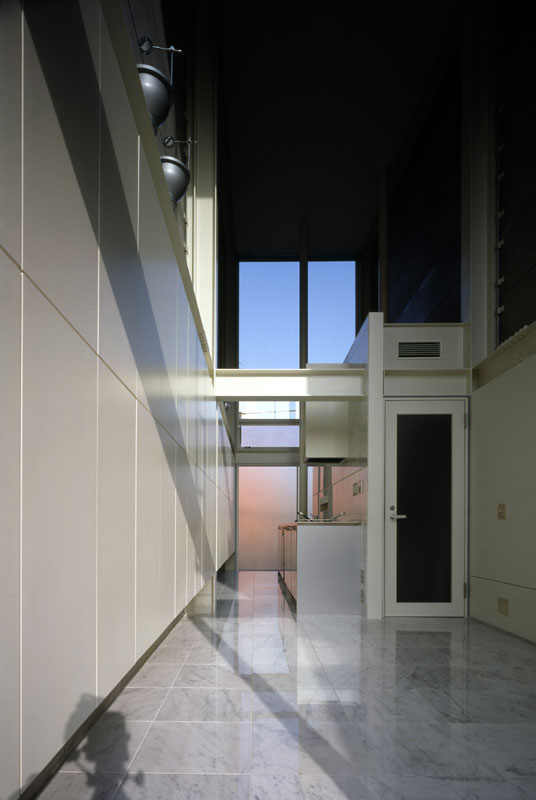 I do not know whether this house with its tiny terrace and dining room can be called a work of modern architecture. However, I am convinced that there is one thing we need to avoid, and that is to be blind to what our age has wrought. 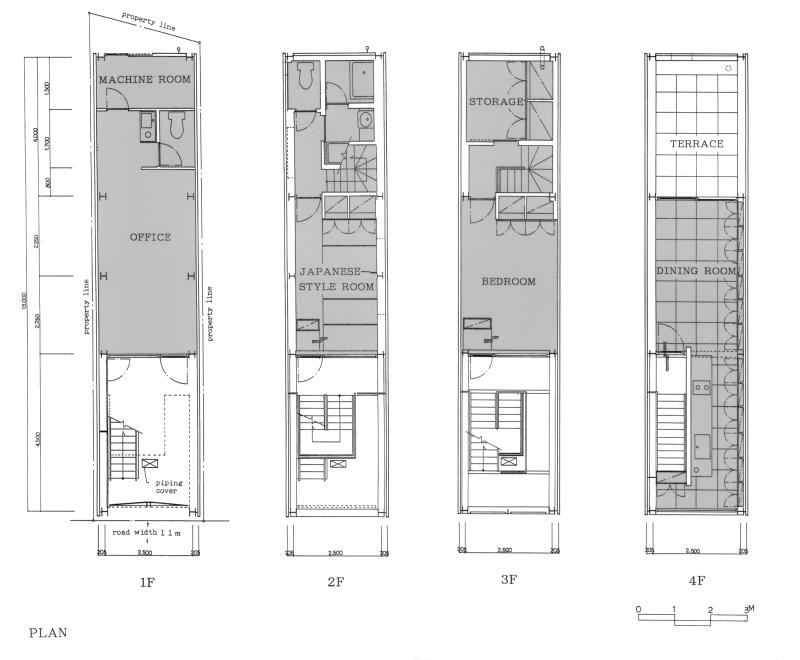 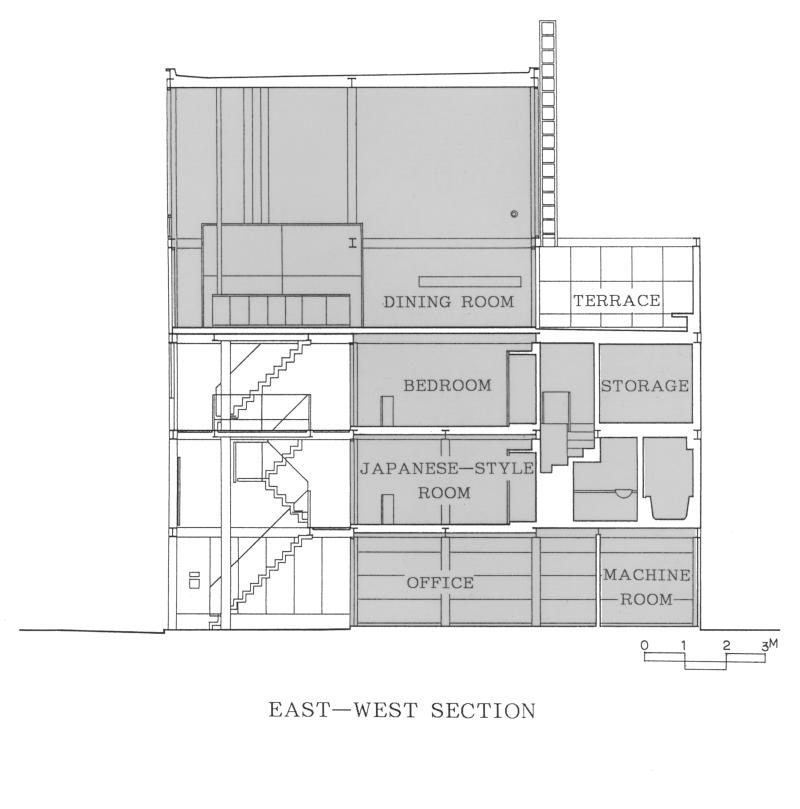 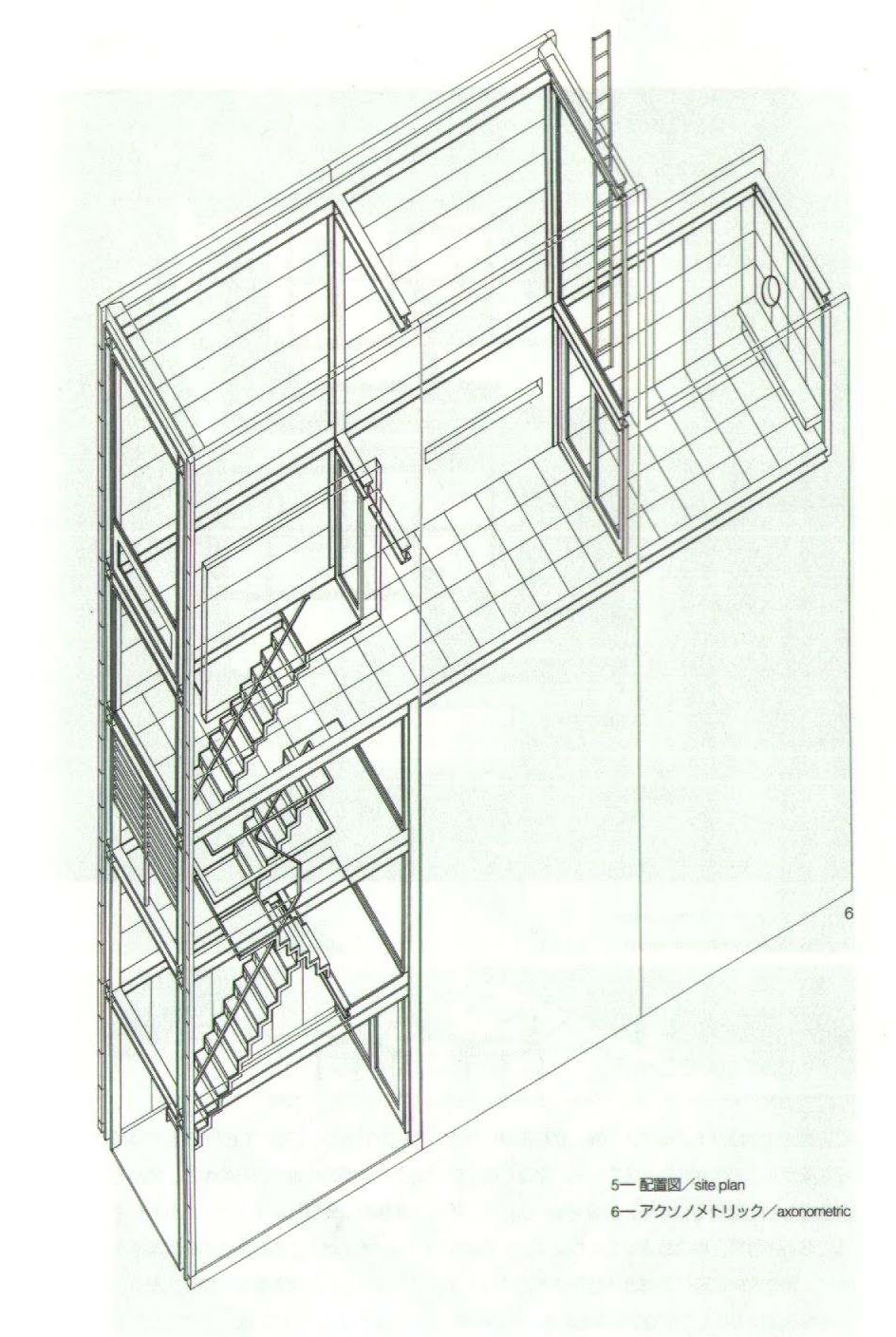