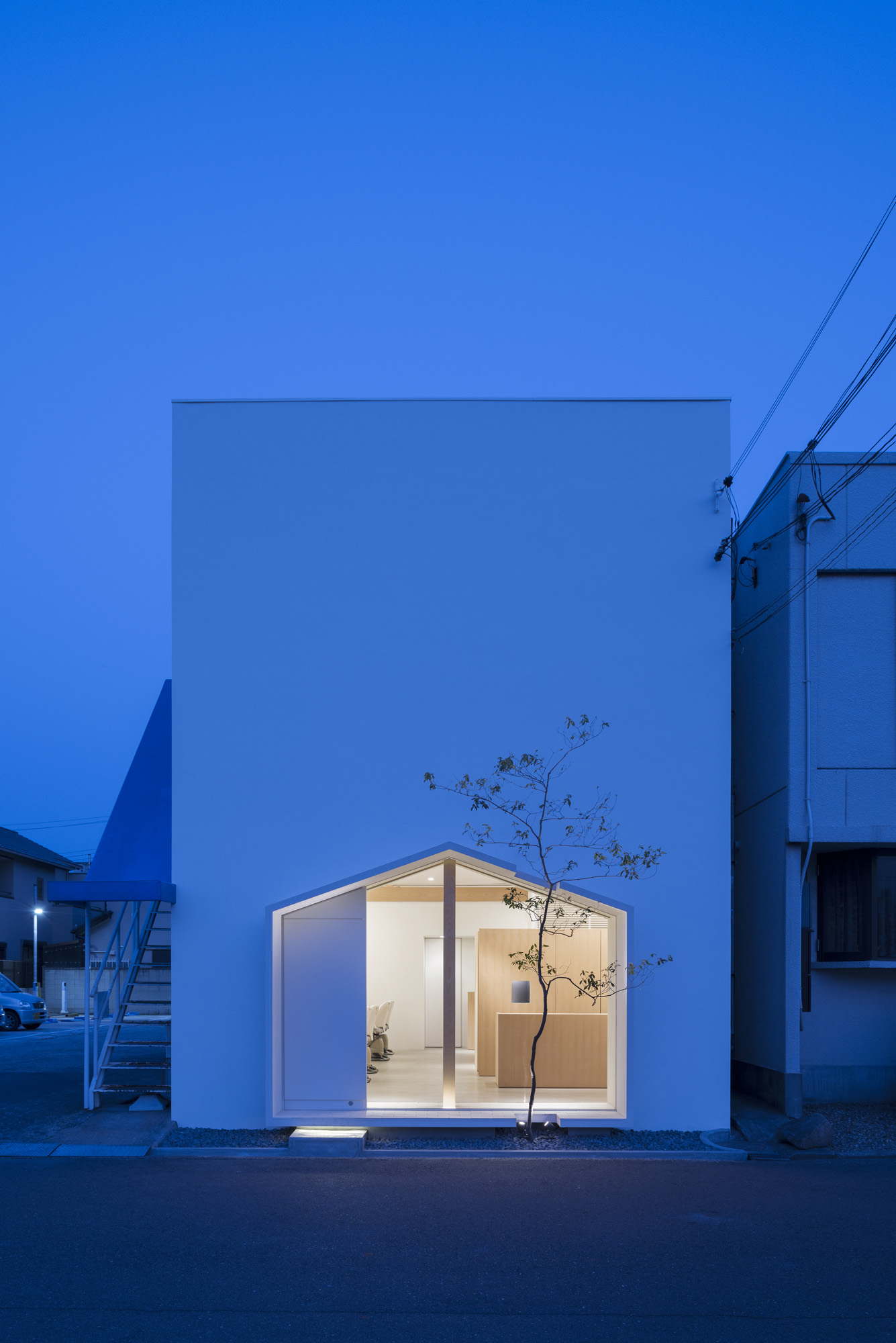 If there is a form of the ideal to the shop, it may be to blend naturally as part of the town. It is that, rather than the sign-lit brilliantly, to continue to be as existence is connected to the people indeed. 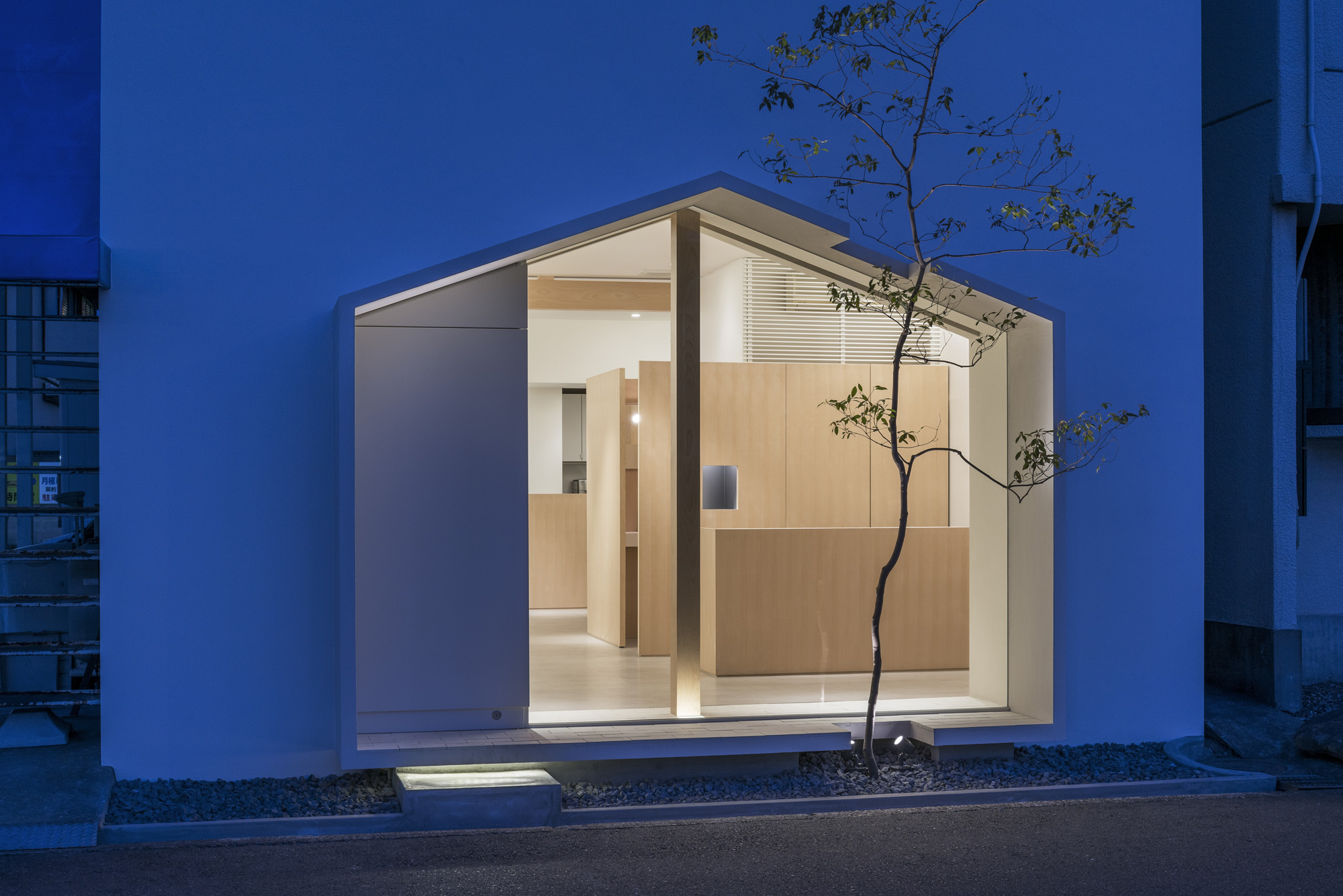 a house-shaped frame serves as an entrance to the salon

‘folm arts’ is a renovation project of the beauty salon during the ten years have passed since the time along with the town from opening. There was a figure of the shop owner exchanging greetings friends with people of the town who went through the shop front. The figure already seemed to be a part of town. It is a renewal of the shop for 10th year. 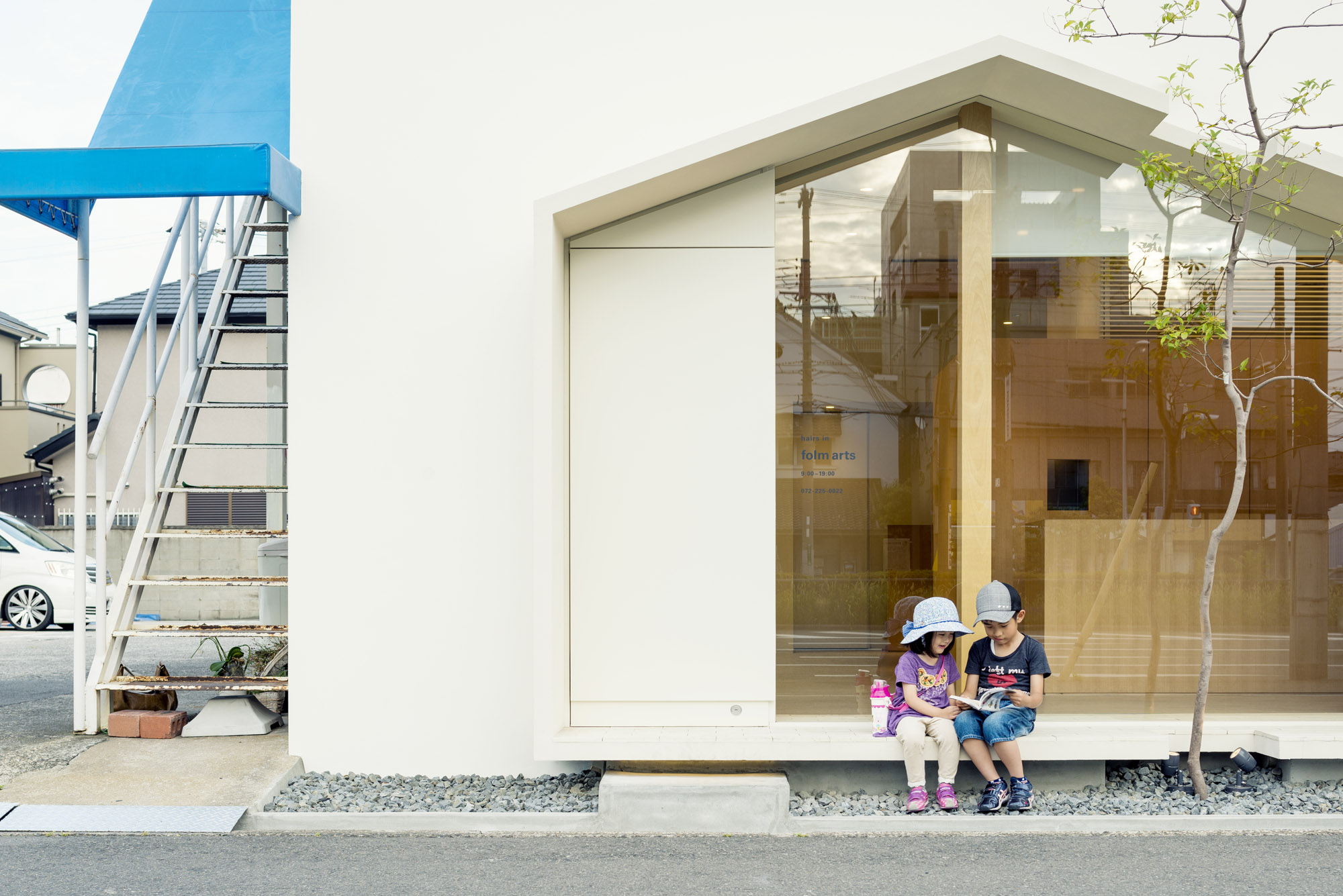 The frame of house type reflecting the image of intimate connection with the town provided in the facade of the shop, are beginning to become the icon of the town. While leaving partially, what he continued to use it carefully for many years, we have reconstructed a new space in the shop. In the shop front, the shop owner exchanging greetings with people of the town and is watering trees, as usual. Through the frame of the house type of tunnel shape, connection with the town and the shop, has been practiced in the storefront today. 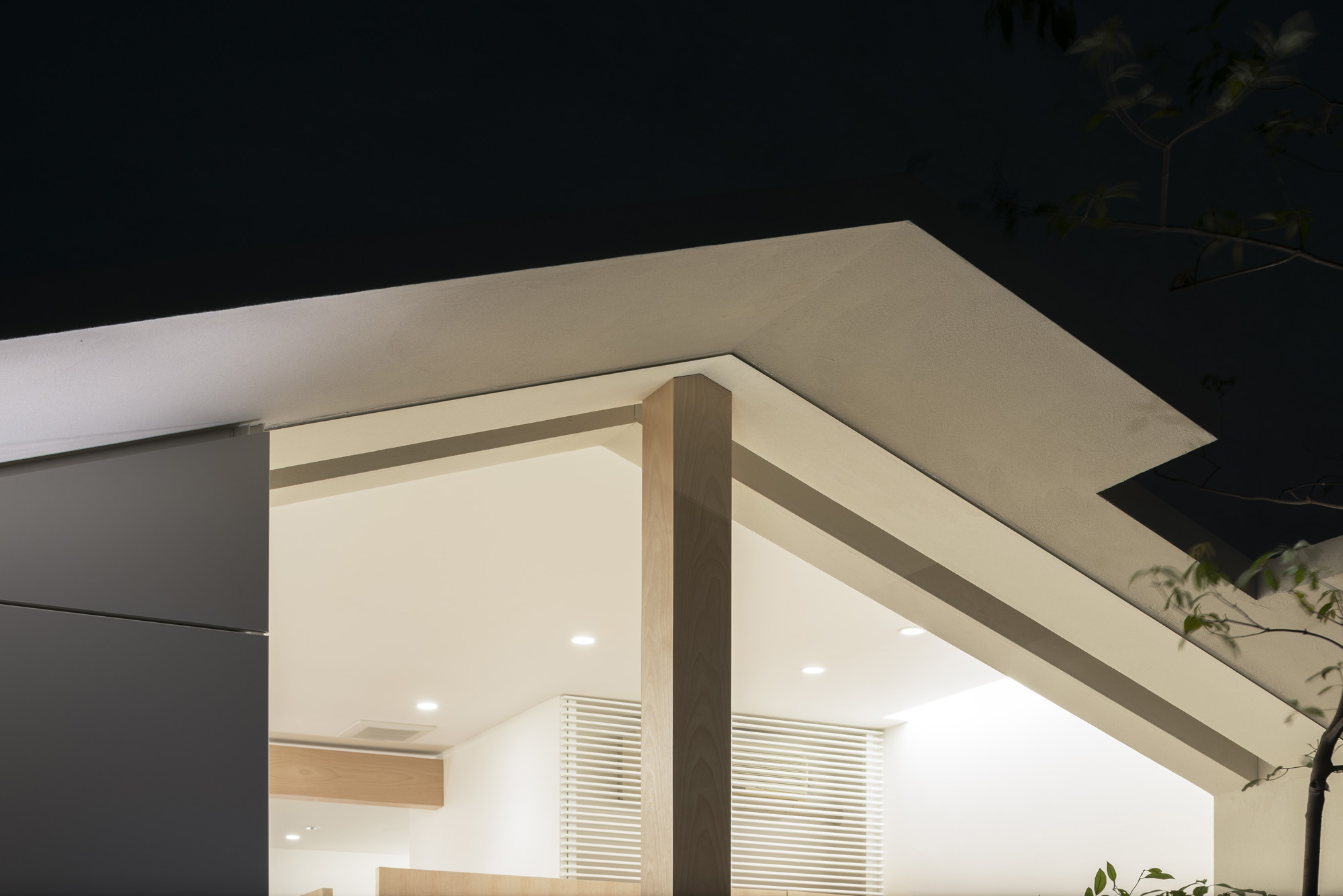 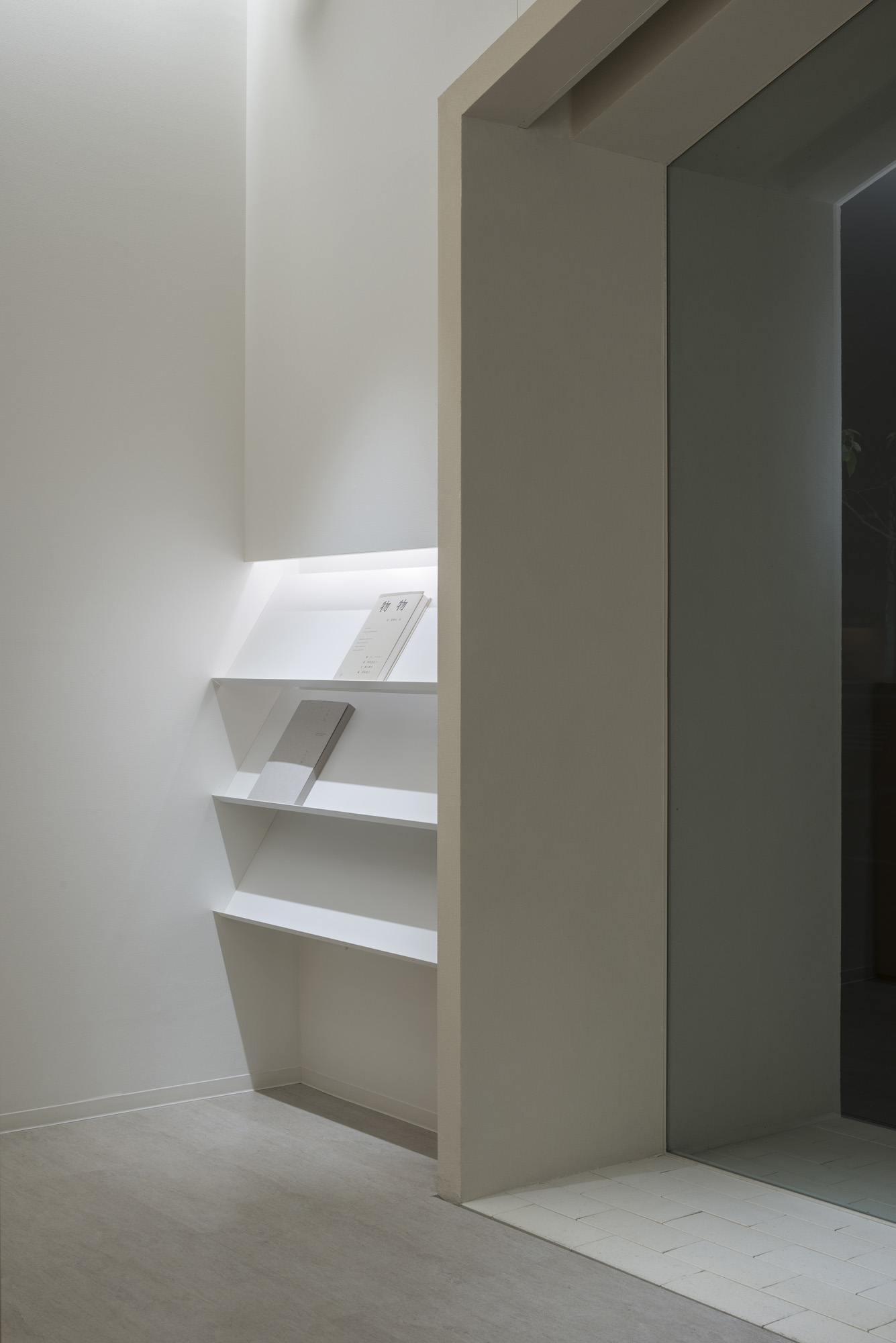 The shop and the town, are connected with each other deeply through the frame. And from now, the shop will continue piled up time as part of the town even more. 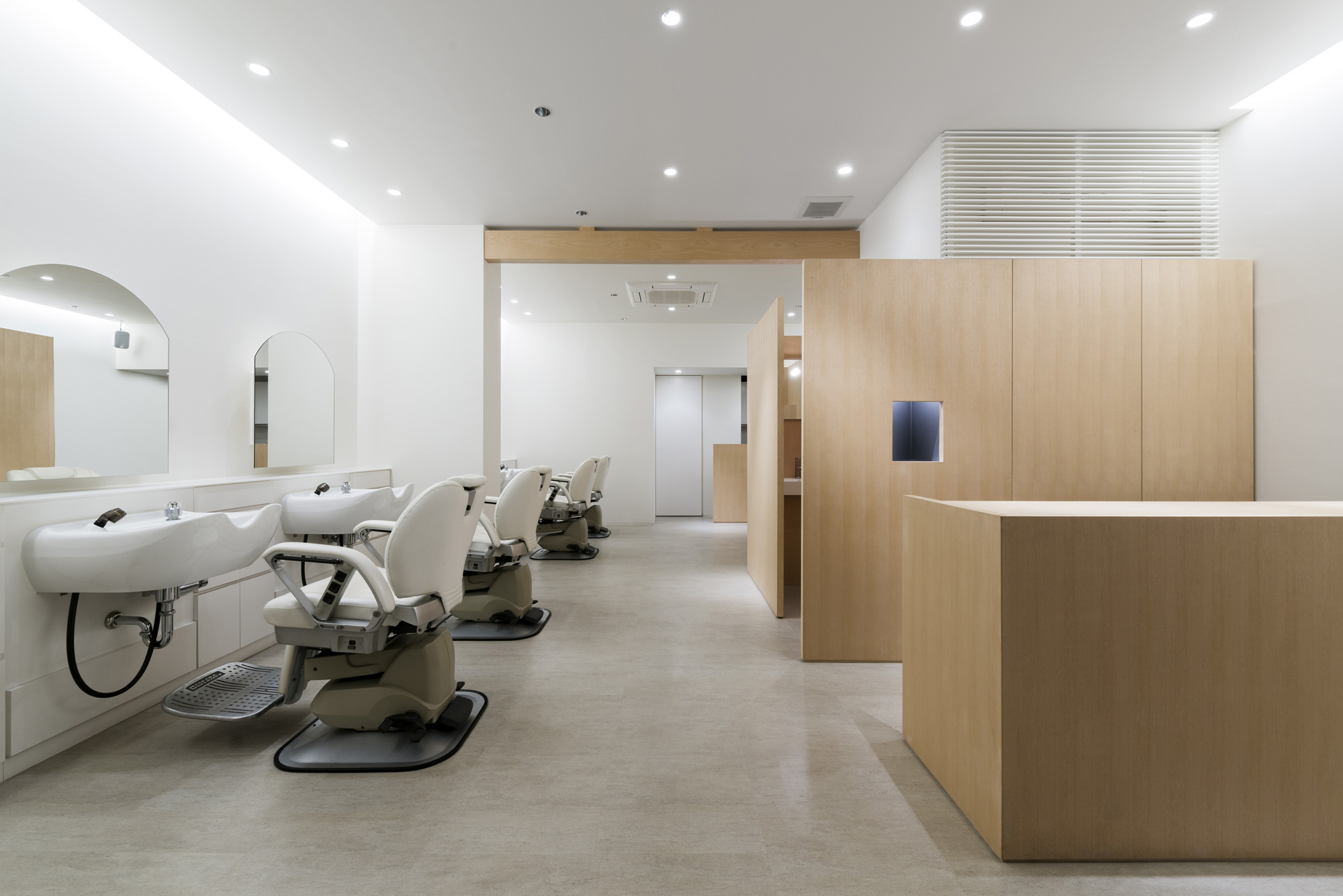 view from the entrance

The frame type of house that was built in the tunnel shape, is summarising various functions to one. An entrance door, the blind of the measure against the afternoon sun in the evening, the space of a waiting and a bookshelf, and planting, lighting…

Various elements are connected to one and the facade is constituted. It has succeeded in enabling simple composition and excluding an excessive element by collecting various functions to one. 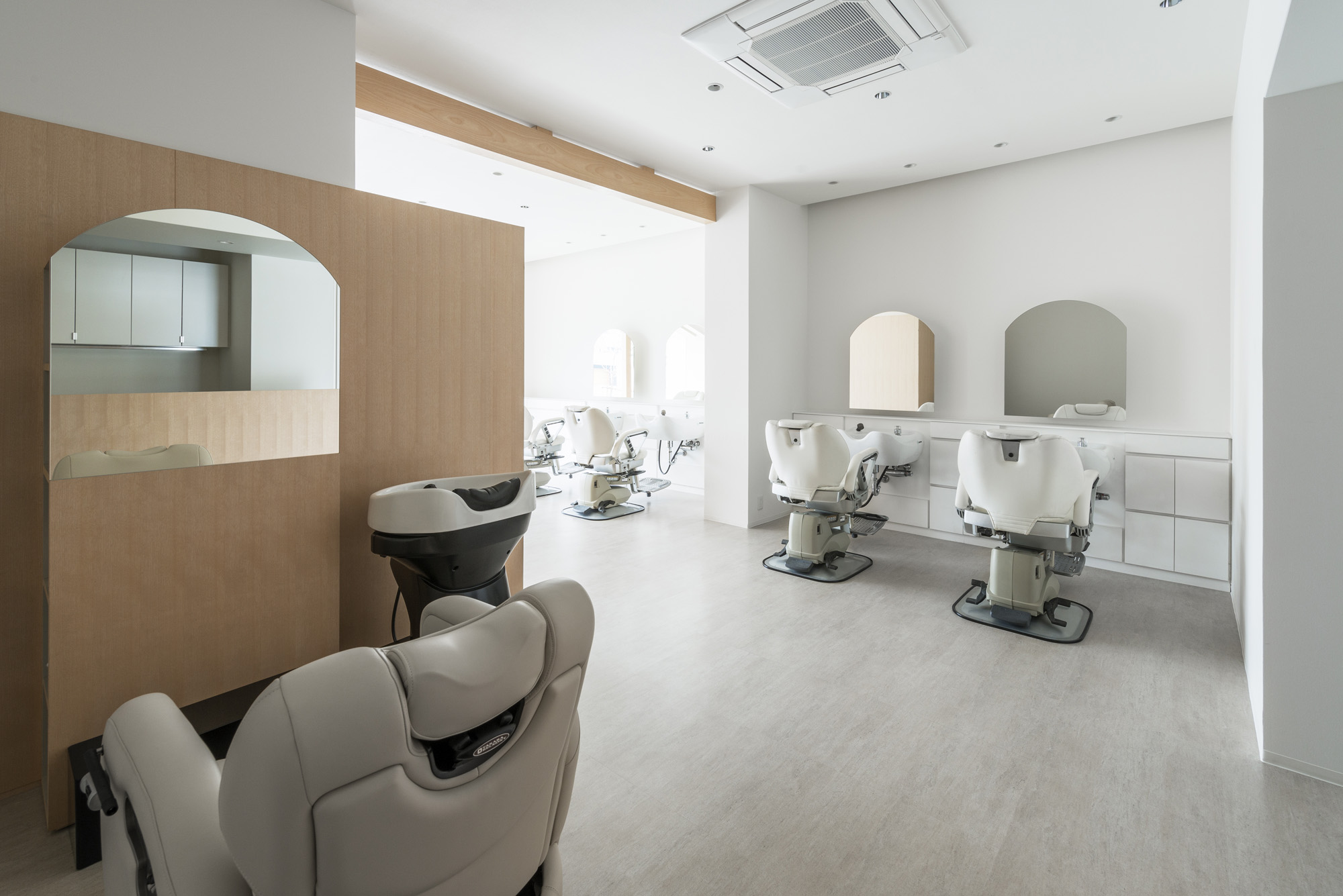 the back of the salon where private areas are also located 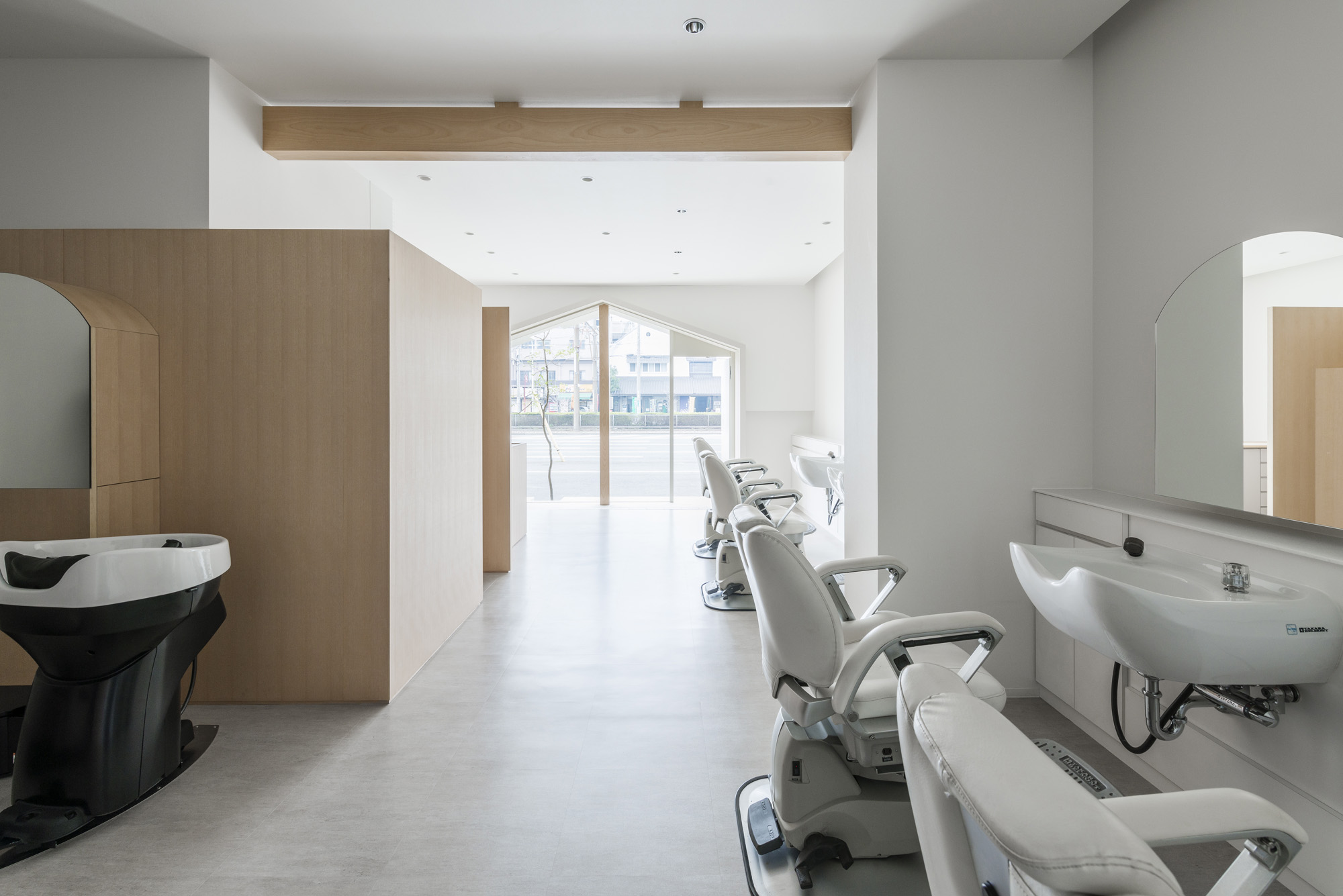 I believe images with shapes that reminiscent the universal, to function as a common language beyond the language. I think from children to the elderly, regardless of country, language of common give people the impression of a uniform. In addition, the effect, I believe is in Asia with similar climate, culture and distance, I can expect even more.

The frame of the house type cited the shape of a house, as reminiscent of an intimate relationship like a family, it was adopted. As an icon of the town, the shop will be rooted in the town in the future. 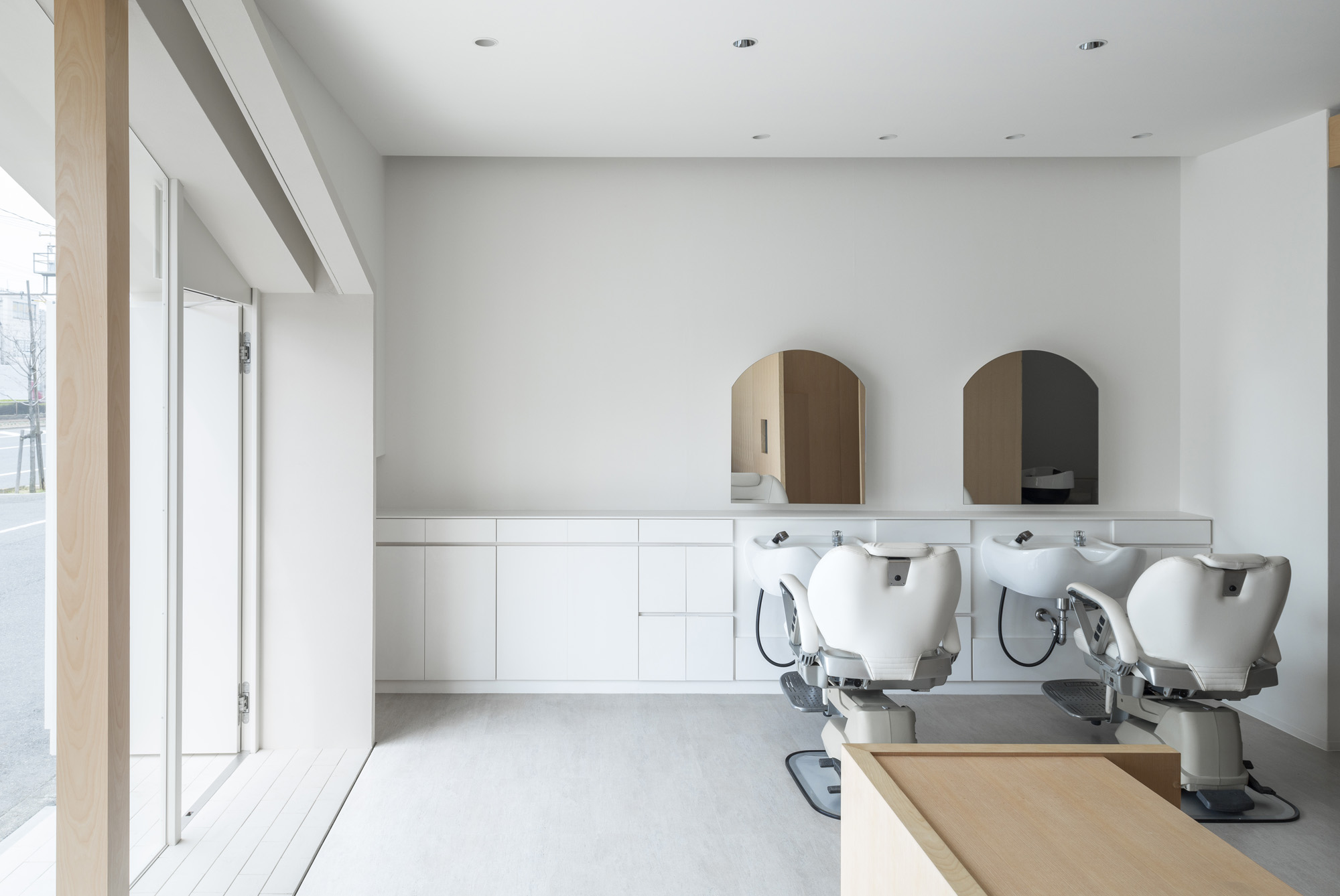 two styling stations are located across the reception area 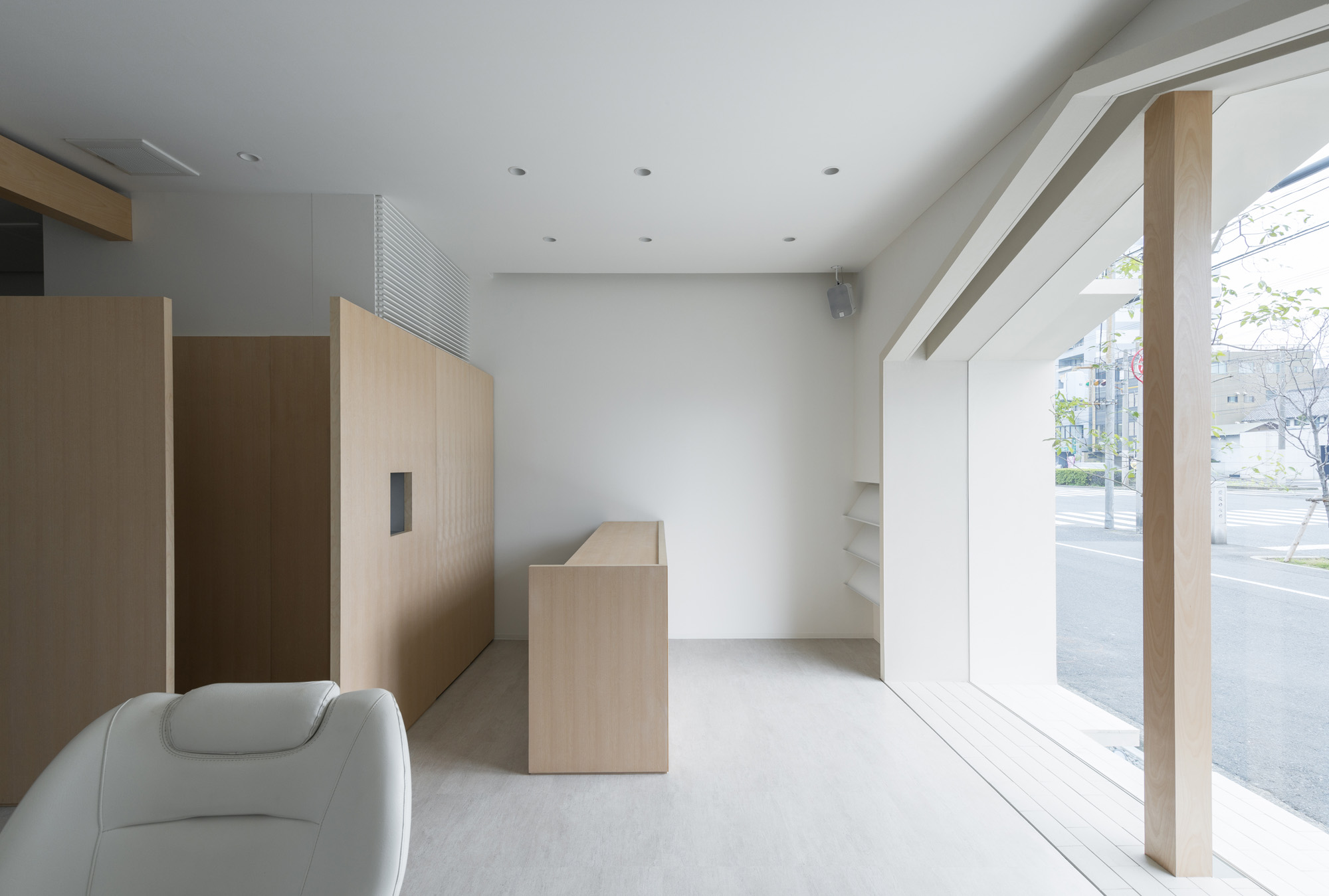 People of the town which memorises feeling of a certain kind on a house type frame, and it newly visits. People who point out the facade of a beauty salon and talk. People who wait for people. The passerby who parks and observes a car. Gradually, the beauty salon is beginning to function as an icon of a town.

From now on, various dramas will start at the store. One year, three years, and ten years after. The role of a new store has started as a part of town. 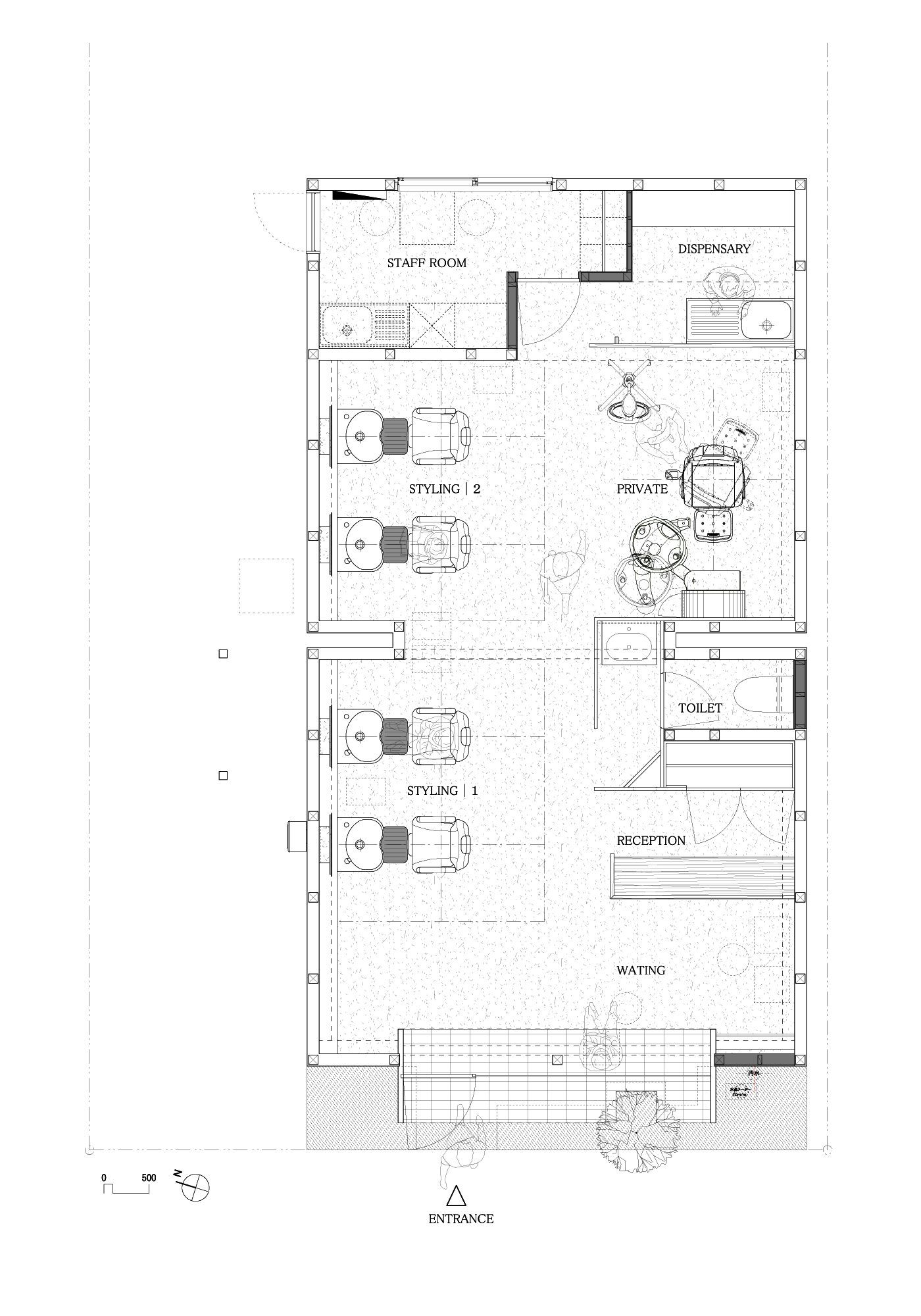